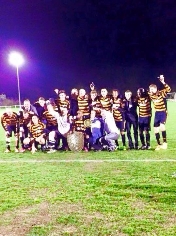 Taylors first Junior Shield success was in 2005 with AFC Bullnose who blitzed Cropredy 5-0 in the final, this time around Taylor led his team to victory as manager alongside Wayne Cooper and Stuart Parsons.
It was double joy for Taylor and David Jennings who both celebrated their birthdays on cup final weekend, in fact David Jennings was in the AFC Bullnose squad in 2005 but missed the final. He made amends for that this time around, when he netted the first penalty in the shoot out, his first penalty for 10 years. Taylor added it was a great feeling to win it the first time, but, this time round was really special for several reasons. We have a good squad of players with the right mix of experience, youth and talent throughout the team. It was mixed emotions for joint manager Wayne Cooper, who sadly lost his father before the final. Cooper said we knew we had the ability to win it and there we had plenty of motivation for a variety of reasons. Im proud of every single one of them for their contribution through the whole season, just the final victory. Rovers who have already sealed the League winners spot, now look towards more silverware with the OCFA Premier & Couling Cup finals approaching. The Couling Cup Final gives Rovers a chance to avenge their one and only defeat this season, when they meet Supplementary Cup winners Black Swan FC at Abingdon Town FC on 9th May, 4.00pm kick off.