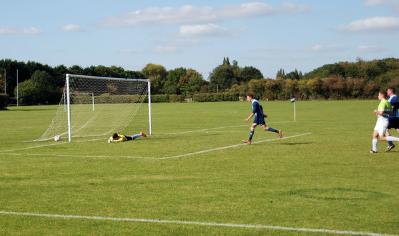 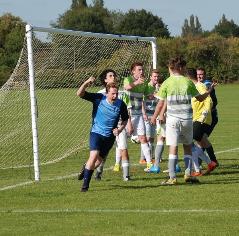 Paul Gray reels away with delight after netting at the back post. 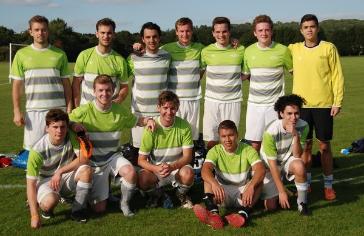 An eight goal thriller and a four-timer for one player ensured that the goals continue to flow in the OCFA.

Two of the League’s early pacesetter’s SUMMERTOWN AFC and ZUBRY (SAT) FC met at a sunny Cutteslowe Park. It was very much a game of two halves, which saw Summertown taking the initiative from the first whistle by applying pressure and forcing Zubry to make mistakes. Five minutes into the game Charlie Rundle converted a Ben Williams free kick to make it 1-0 to the hosts, then in the 20th minute they found the net again when Ola Abiola beat the offside trap and slotted past a stranded keeper. The third came 10 minutes later through a Charles Appiah strike and with a stunned Zubry looking for the half time whistle, Ben Williams added a fourth just before the break to go in 4-0 up at half time.
Zubry’s half time ‘team talk’ obviously worked as the roles were reversed at the start of the second half, this time it was Zubry who were applying the early pressure and with Summertown sitting back it wasn’t long before they found their way to goal. Sebastian Cielieski started the ball when he notched Zubry’s first, this was followed 5 minutes later by Tomasz Samoluk effort. The third came when Michal Filipowicz effort was fumbled by the Summertown keeper, now the fight back was really on. With time running out and pushing hard, Zubry’s determination finally paid off when Tomasz Samoluk bagged his brace to level the scores at 4-4. But, Zubry had their goalkeeper to thank, when he pulled of a fantastic reflex save in the dying minutes to deny Summertown the win.

At Horspath Road, FAIRVIEW FC the oldest serving club in the League played host to, one of the newest BROOKES UNIVERSITY FC. In a well contested game which saw Brookes put Fairview under increasing pressure, Lewis Moss opened the scoring for Fairview against the run of play. But the pressure continued and Brookes got an equaliser just before the break to make it 1-1 at half time. Brookes started the second half as they had finished the first, when they netted a second to go 2-0 with their goals coming from Adam Wynnell and Phil Morgan. With the game ‘end to end’ Fairview equalised through Sid Mobbs and Fairview’s pace up front was starting to cause Brookes some problems. This ended with Fairview getting two late goals through Paul Gray and a 25 yard screamer from Luke Moss to secure the 3 points for Fairview.

A depleted WHEATLEY YOUTH FC had the better of the first half against NOCC (SAT) FC at Holton Playing Fields, which saw them hit the crossbar and force the NOCC keeper to make a fine close range block after some neat play by Wheatley to see both teams go in goalless at the break. The start of the second half was pretty much like the first, but, the deadlock was broken when Sharman Davis poked the ball home for NOCC after a goal mouth scramble. Davis then found the net again in the 80th minute when, he was set free to lob the ball over the Wheatley keeper. Wheatley’s determination finally paid when, Kyle Moss converted a late penalty, which turned out to be a consolation in a 1-2 loss.

ST. EBBES (HEADINGTON) FC played host to League leaders CHEQUERS FC, although the game finished 7-2 to the visitors it was four “unbelievable” goals from Otis Woodward that made the difference. Chequers other goals came from Craig Dean and Dave Jennings who bagged himself a brace, Stuart Rainey and Ben Dyer were the scorers for St. Ebbes.

In the Leagues remaining fixture THAME UNITED CHURCHES FC had a narrow 2-1 home defeat to MASONS ARMS at Horspath Road.