SEASON TO REMEMBER FOR ST. EBBES 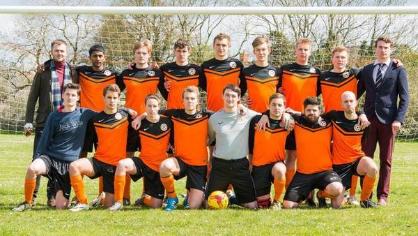 St. Ebbes (Headington) FC prior to their semi final victory.

St. Ebbes (Headington) FC made it a season to remember on Saturday, booking themselves a place in the Couling Cup Final after a 4-3 semi final win against Zubry (Oxford) FC.

St. Ebbes now play Chequers FC in the final at Abingdon Town FC on May 14th, 2pm kick off. Last weeks Doug Hobbs semi finals saw NOCC (Saturday) FC ease into the final with a 10-3 win against Oxford Brookes University 4th FC, while in the other semi a Leigh Paintin hat-trick helped East Oxford FC to a 5-0 win against Thame United Churches FC. The Doug Hobbs Final is on May 7th with a 5pm kick off, with the Premier Cup kicking off at 2pm on the same day, both being played at Abingdon Town FC.