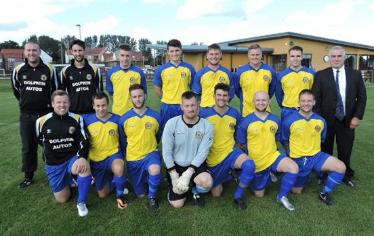 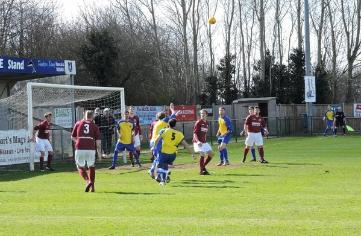 There was a minutes silence before the match in memory of Stephen Green who had been involved in refereeing in the Reading area for many years.

In the early stages, we pressured their defence, creating several chances and Chris Hall came close, but then scored to make it 1-0, after 9 minutes. A short while later Chris went through again passed to Tom Amis who scored to make it 2-0 in 16th minute. Charlie Bartram ran through and the keeper handled just outside the box and form the free kick the keeper make a good save. They pushed forward and a shot was deflected but Ryan Hemmings, our keeper, who reacted well to save it. As another free kick was floated in, we nearly added another one. Quami Thomas was causing a few problems for us on the wing and as he cut inside, his shot was blocked to clear the danger.

In the second half, the visitors had more of the midfield play but Kieran Rose overlap on the left and his cross shot went close. Following some good passing moves, Thames Valley created several chances in a short period and scored in the 25th minute. A few minutes later an Aaron Kay free kick nearly beat their keeper but he just managed to save it and they went down the other end and scored to make it 2-2. As we pushed forward for the winner, Chris Hall came close with a header, just clipping the crossbar, he then broke throw again but their keeper blocked the shot.

In extra time both teams created several chances and it looked like going to penalties. But following another good run from Kieran Rose, he created a chance for Kane Taylor to score the winner, to make it 3-2 and take us into the next round. It was an entertaining, sporting match and congratulations to all our players, for performing so well, to our management team and to the match officials.