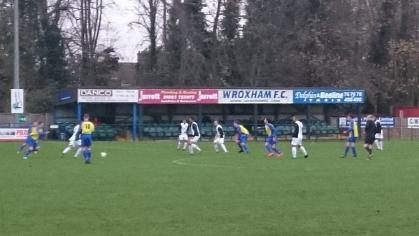 Following an early morning pitch inspection, the game went ahead. Due to the rearranged County Cup matches and some calloffs, we lost several players, so there were some changes to the squad. The pitch was heavy but the players settled down well and the defence was very solid, with Ryan Hemmings behind them in goal, having a superb match, with some great saves. Both teams produced some good football in difficult conditions. With the fulltime score at 0-0 and conditions worsening, players started to tire and injuries kicked in. In extra time, Pat Daly scored twice for the visitors but Ben Morgan got a goal back for us, to open it up again. Sadly Nathan Graham added a third for Spartan and after Ryan went off injured, Pat Daly got a third to complete his hat-trick and make the final score 1-4. Congratulations to Spartan South Midlands on their victory and good luck to them in the Quarter-Finals. Well done to all our players and thanks to Terry Bean, Paul Warman & Martin Plumstead for all their efforts for the team. Thanks also to our clubs for their cooperation and to Wroxham for hosting the match.