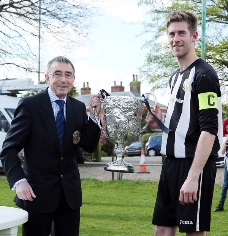 Congratulations to Acle United on retaining the Sterry Cup, with a hat-trick of Premier Division titles. The only other club to achieve this feat was Wroxham in the 1980's.

Well done to all the players, team managers, club officials and everyone else involved at the club.
Congratulations also to Blofield United who finish as runners-up.
By the kind permission of Blofield United, the Sterry Cup & trophies were presented to Acle United, after the Blofield United v Acle United match, on Saturday 25th April.